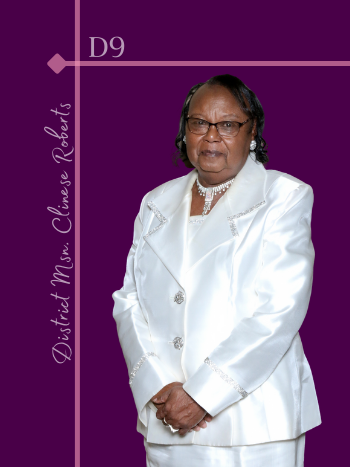 Missionary Clinese Roberts serves diligently as District Missionary for the Number Nine District of Mississippi Southern First Ecclesiastical Jurisdiction.  She was appointed in 1995 by Mother Frankie Davis Murray, Supervisor, under the leadership of District Superintendent Bobbie Henson and Prelate, the late Bishop Hollis Musgrove.  She also serves as an Administrative Assistant to our Jurisdictional Supervisor, Mother Frankie Davis-Murray, appointed in 2004.

District Missionary Roberts is a pioneer and faithful member of New Hope Church of God in Christ, located in Hillsboro, Mississippi, Elder JJ Thompson, Pastor.  She serves in many capacities at the local church.

District Missionary Roberts takes her role as missionary seriously and has a strong passion for The Word of God. Her “boldness to speak the truth” and deliver The Word of God has been a blessing to all who hear her speak.

Missionary Roberts is the mother of seven children, nine grandchildren, and three great-grandchildren. Her favorite scripture is “I can do anything through Christ which strengthened me”, Philippians 4:13.  She is saved, satisfied, and Holy Ghost filled.