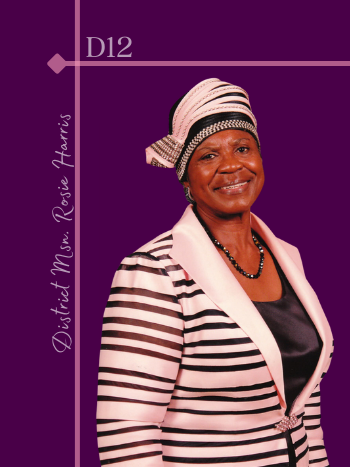 At the demise of Mother R.V. McAdory, a new Supervisor was appointed to serve over the Women’s Department,  Supervisor Frankie Davis Murray. Missionary Harris continued serving under Mother Murray’s Administration.

Missionary Harris organized the District Twelve Women’s Department by ensuring that the Auxiliaries, Units & Bands were in full compliance with the structure as outlined in the Official Handbook of the International Department of Women.  Training sessions were implemented and various committees were formed as needed.  Various Ministries were organized, which included, but not limited to:

Missionary Harris continues to serve the needs of the District Twelve Women’s Department through continuous teaching, training, consecration, and prayer.  As a result, many lives are impacted and changed both naturally and spiritually.